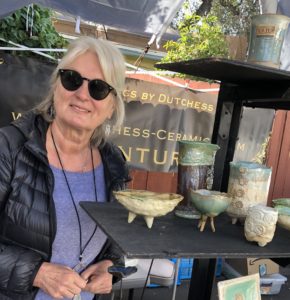 A native to the Netherlands Vera most enjoys sailing, practicing yoga, sculpting in her studio, cooking, writing and laughing with friends (often over a glass of wine at the beach). Vera’s passion for ceramics began in 1994 at Ventura College in California. Vera returned to Europe where she continued her journey at her ceramic studio in the Netherlands, she also hosted several ceramic retreats in France. After 20 years, she moved back to Ventura to start a new studio, where she’s currently residing. You can find Vera teaching at the Ojai Pottery School (www.ojaipottery.com)  Her work is displayed in Ojai as well at the Ova Gallery.

Aside from her distinguished ceramics career, she also has a passion for yoga. In 2008 she finished her Raja-Yoga-teacher degree in the Netherlands. Since then she has hosted many Mindfulness and Yoga Sailing Cruises in Turkey / Greece. She is also the USA agent for chartering a Yacht in Turkey which you can learn more about in the sailing link on this website.  Vera is outgoing and trustworthy businesswoman.